The oil made with Arbequina olives has a mild taste, a little sweet, with a certain fruity smell and very light, reminiscent of shades of nuts. Its color is strikingly green.

Arbequina olive provides an extra virgin olive oil with a high percentage of oleic acid and lower polyphenol values ​​than other olive oils, which significantly help to improve the cardiovascular system. 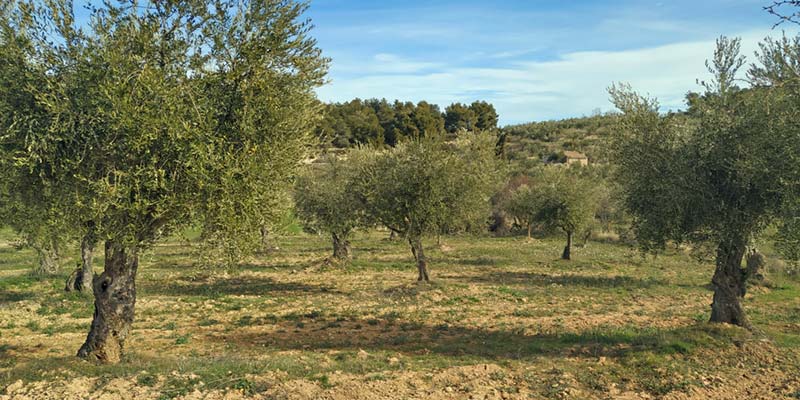 Field of Arbequina olive trees from L’Espluga Calba.
The Espluguesque olive groves are surrounded by aromatic plants such as rosemary, lavender, thyme and an incredible variety of native flora characteristic of the intersection of the Mediterranean climate with the continental one. The soil has a high mineral content that nourishes the trees and gives body to the fruits.

What is the Arbequina olive

The Arbequina olive is a variety that was introduced to Spain in the seventeenth century by the Duke of Medinacelli whose origin is Palestine. This duke lived in the palace of Arbeca, in Catalonia, and from there comes the name given to this variety of olive tree.

It has great resistance to cold, but little to soils rich in calcium carbonate or limestone. Its vigor is reduced and its fruits are the smallest of all the varieties grown in the country (it weighs between 1 and 2 grams).

In Spain, Arbequina olive plantations are mainly in Catalonia, Aragon and Andalusia, and in other regions of the world such as La Rioja, Argentina, Minas Gerais in Brazil or La Maule, in Chile, and more recently, in Uruguay. .

Its low vigor favors a high density of plants, and is currently the basis of modern intensive plantations. In some of them a density per hectare of up to 2,000 plants is reached.

Arbequina olive oil is of extraordinary quality. Oils made with Arbequina olives usually have a sweet touch and are more fluid, and both bitterness and spiciness are barely noticeable.

Les Garrigues, the official name in Catalan is Les Garrigues, is a region belonging to the province of Lleida, in Catalonia. It is located at a strategic point between the counties of Plá d’Ugell, Segrià, Les Garrigues, Urgell and Conca de Barberà.

The land of Les Garrigues is special, and on it you can see olive and almond trees, with the olive tree being the most widespread crop. The variety, of course, is the Arbequina olive. This olive, we already mentioned, is small and round.

And of course the companies and cooperatives that meet the strict requirements, produce oil with DO Les Garrigues, such as the Cooperativa de Camp de l’Espluga Calba, and its Spelunca brand.

And why is the oil with DO Les Garrigues so special? Because in addition to its organoleptic qualities, the extra virgin olive oil Spelunca de l’Espluga Calba DO Garrigues offers characteristic aromas of almond, leaf, tomato, etc., which link the olive to the territory where it is born. cultivate crops.

Spelunca Espluga Calba DO Garrigues extra virgin olive oil has quality controls certified by the Regulatory Council. For the cooperatives that are part of Les Garrigues, quality is the most important factor when bringing the product to the consumer.

When we cook with Spelunca de les Garrigues extra virgin olive oil, the flavors of the food are enhanced, giving them a greater personality. The density of the oil increases with heat, which means that not as much will be needed when frying, and consequently it is not used as much as with other oils.

But raw is when you notice more the organoleptic qualities of the oil with DO Les Garrigues, the food does not change its structure and remain crispy, without excess oil.

Its gastronomic and culinary use is wider than that of other olive oils, thanks to its soft and sweet character. Children usually like it a lot, and also those people who are not used to the strongest taste of olive oil.

It is especially recommended for making mayonnaise and other delicate sauces because the taste is not strongly imposed, as well as a substitute for butter in the preparation of biscuits and cakes.

In salads that include homemade fruit very well, or in toast with a fillet of oil and tomato (like our endearing snack of a lifetime), and to prepare fish and seafood or marinate them, such as pickled anchovies or salmon marinated.

But, needless to say, the oil that comes from the Arbequina olive has the disadvantage of being more unstable than other varieties of olive oils, so it is not the best for preparing fried or stewed, although the same can be done. 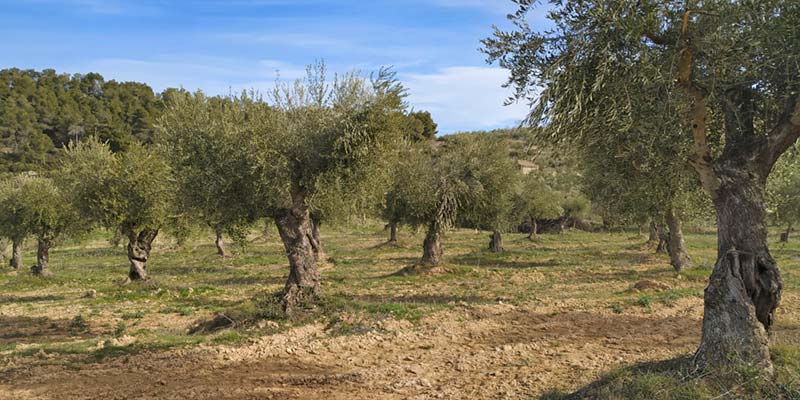 Field of arbquine olive trees of the Espluga Calba.
The climate is very contrasting, the winter is very cold, it snows for many years and at night the temperatures drop below zero. This is beneficial for farmers because many insect pests do not withstand these colds and thus save on chemical treatments.

The virgin olive oil produced in Les Garrigues is considered one of the best olive oils in the world because its producers pamper the land, feed it and love it.

Les Garrigues is one of the Catalan counties with the longest tradition in oil production. In addition, it has the oldest DO in Spain, awarded in 1975 and recognized by the EU in 1996.

But the quality of the extra virgin olive oil Spelunca Espluga Calba DO Garrigues, in addition to being made with Arbequina olives, is the result of other factors that accompany it: the climatic conditions of the region, with abundant fog and little rainfall allows for proper growth.

The cooperative of the Espluga Calba does the manual recolección directly of the tree in alliance with the agriculturalists, who carry it directly, without intermediaries; this means that all the olives are in perfect condition (there are no bumps or bumps), and that the ripening is optimal.

Spelunca extra virgin olive oil, from Espluga Calba, is made with 100% Arbequina olive, without mixtures, and with traditional cold pressing systems, which guarantees a top quality product with biological properties. and unbeatable organoleptics.

The oil with DO Les Garrigues Spelunca of the Espluga Calba also has the seal of quality of integrated production and comes in containers of 250, 500 and 750 ml, and of 2 and 5 liters.

In the format of 500 ml is how the specialty of the cooperative is presented, the Spelunca Premium, in which the process of selection and manufacture of the extra virgin olive oil of the Espluga Calba is taken care of to the smallest detail .

From each tree the best olives are chosen at their optimum ripening point to be pressed with the utmost care, the result being an unsurpassed product, with characteristic color and aroma.

The packaging of this oil is taken care of down to the smallest detail so that the light does not alter either the taste or its properties, for this reason dark glass bottles are used.

Virgin olive oil is obtained through various processes, whether mechanical or more artisanal. The degrees of acidity and its quality determine its name. There are several types:

Extra virgin olive oil has a maximum acidity of 0.8 °, which is the maximum they can reach.

To give you an idea, the oil with DO Les Garrigues de l’Espluga Calba does not exceed 0.2 ° on average.

For virgin olive oil the acidity should be in the range of 0.8 to 2 °.

It is a type of oil that is used for cosmetic purposes, but is not usually used for cooking. To be consumed it must go through refining processes. Its acidity exceeds 2 °.

It is obtained by clarifying defective oils unfit for consumption. When an olive oil is refined, it loses many of its healthy organoleptic characteristics, resulting only in vegetable fat.

Olive oil without another adjective is achieved by mixing refined oils with a minimum percentage of virgin oil, which gives it a little color and flavor (this for commercial purposes only, so that the consumer does not reject it).

The oil with DO Les Garrigue Spelunca from l’Espluga Calba, produced entirely with Arbequina olives, is a sweet oil without any bitter aftertaste. It should be noted that in front of another Arbequina olive oil can produce a certain itching in the throat, denoting nothing more than its freshness.

It is a very aromatic oil, with fruity scents reminiscent of apples or bananas. When the Arbequina olive is more ripe it tends to produce an oil the flavor transports to the infantile fruit porridges; this is due to its high percentage in polyunsaturated acids.

It also has, as we noted at the beginning, a large supply of oleic acid, which helps control cholesterol levels (lowers the bad and raises the good).

Consuming the extra virgin olive oil Spelunca de l’Espluga Calba DO Garrigues is one of the healthiest habits that can be adopted, combining it with our traditional Mediterranean diet that gives such good results.